The following blogs have been written for us as part of World Autism Awareness Week by two members of our coordinator team who have children on the autism spectrum. Names have been changed to protect the identity of family members.

When my son was born there were a lot of myths surrounding autism. One myth was that autism is caused by vaccines. My son, now aged 13 was vaccinated during a media climate of TV news reports which concentrated on showing clips of children not communicating, parents convinced that the MMR vaccine was responsible for their child having autism. The research surround this has now been found to be flawed and although scientists don’t fully understand what causes autism, it is thought to be genetic. 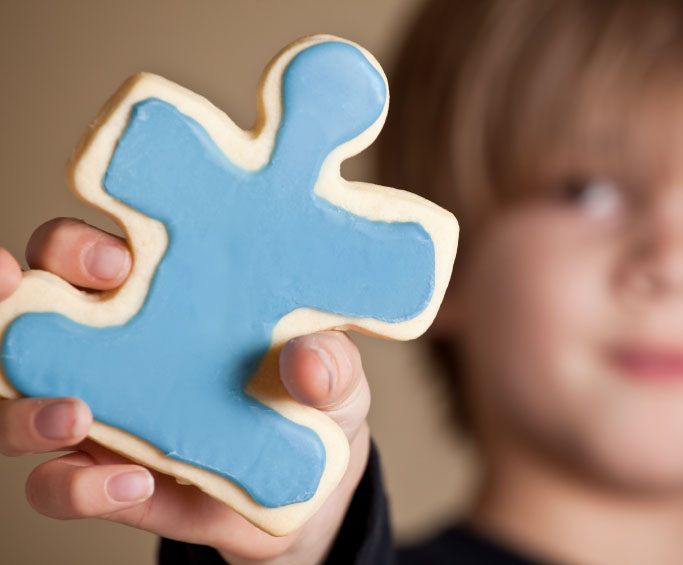 Our son received an autism diagnosis in 2011. As a baby he spoke and had a good command of language, but things like haircuts and changing routine could present a problem. It wasn’t until he was at school, when a teacher suggested we get a referral to the child development clinic that we became aware our son may be on the autism spectrum. It took two years of form filling, assessments and appointments to establish that he was autistic. Upon receiving this news I felt relief. I also experienced grief. What would the future hold for my son? Would he reach the same milestones as his older neurotypical brother? But I was also relieved. Relieved, that my child was autistic, not naughty. His behaviour, which could be perceived as stubborn or obstructive was sometimes due to finding the world overwhelming, and he was unable to express this in words.

Having a name for his behaviour – autism – meant I could focus my attention to learning what may help him in difficult situations. Having this information has enabled me to understand why certain situations can cause anxiety, and having more of the understanding of the condition has benefited us a family. We may have to prepare my son for a new situation so he has an understanding of what to expect. Avoiding queuing is something which makes a family day out much less stressful.

Having an autistic child can have its challenges, but I wouldn’t change my son. Autism is part of him. This is why promoting autism awareness is important to me. I’ve learned so much by having a child on the spectrum and I want to change attitudes and perceptions about the condition. I want to ensure those negative images of autism are challenged. I want my son, his peers and the 700,000 people in the UK known to have the condition to live in a world of understanding and acceptance.

Not every autistic person has a savant skill (someone with significant mental abilities far in excess of average). The skills at which savants excel are generally related to memory; similar to the character in the film Rain Man). Indeed, if my son did have an aptitude for understanding the sequencing of gaming machines I would have long since retired! Autism is unique. It’s a spectrum condition, not a line or scale.

Like any parent I have concern about my child’s future, but I worry about some things you may never have considered if you are a parent.

Will my child be able to make his own way to and from secondary school independently?

Will he ever stop wearing gloves during the month of August?

What will happen if they stop making the only brand of toothpaste he will use?

What would happen if my son needed the help of the police?

Would he be able to communicate effectively?

Would my child become a victim of crime as a direct result of his difference? Autistic people are more likely to be victims and witnesses of crime than offenders.

Will he get a job? Only 16% of autistic adults in the UK are in full-time paid employment, and only 32% are in some kind of paid work.

Will my son ever be able to answer a question without answering “I don’t know”.

Would a police officer be able to help him if he became distressed? (My son refuses to speak when things are difficult, because he’s processing information and may not know what words to use).

Will people always assume my son is rude if he does not give eye contact when being spoken to?

Do police officers have enough understanding of neurodiverse conditions? Neurodiversity is the concept where neurological differences are to be recognised and respected as any other human variation. These differences can include those labelled with dyspraxia, dyslexia, attention deficit hyperactivity disorder (ADHD), dyscalculia, autistic spectrum, Tourettes and others.

My interest in promoting autism awareness had led me to becoming my Force single point of contact for autism, and our Force lead contact for the National Police Autism Association.

My son Peter, while not as outgoing as many of his peers, looks like and – trust me, speaks like your neurotypical teenager! However Peter was diagnosed with high-functioning autism two years ago. Autism is a lifelong, developmental disability that affects how a person communicates with and relates to other people, and how they experience the world around them. Peter suffers from extreme anxiety – his whole life is based around fear and he struggles with social communication. He can easily misinterpret situations and conversation. Living and coping in a world designed for neurotypical people is difficult and challenging and can lead to behaviour issues. For Peter the little things are the BIG things.

Being a parent of an autistic child can be extremely challenging: we face constant struggles, such as explaining on an almost daily basis how Peter thinks and about the condition itself. It can be tiring and frustrating. When the opportunity arose to join the National Police Autism Association as the Deputy Coordinator for my Force, it was an offer I could not refuse. It’s given me the opportunity to raise awareness about the condition. I want to ensure the negative images of autism are challenged. The role has allowed me to pass on my knowledge of the condition and help with the education in how to recognise people with autism and how to understand what steps can be taken in order to communicate and deal with autistic people positively. My lead coordinator and I have recently conducted training sessions with new PCSOs and police officers where we have given input on the subject of autism – the feedback suggests these have been both beneficial and enlightening. We will continue to work with our colleagues raising autism awareness and we encourage everyone to join the NPAA to learn more or seek support. You don’t need to be directly affected to join, just an interest in learning more.

I can empathise with colleagues who themselves may be parents or carers, and who may be going through similar challenges as myself. I have gained an understanding of how difficult and stressful it can be, the challenges, and indeed rewards of raising a child on the autistic spectrum. Knowing you are not alone can make a real difference.

Autism has been highlighted a lot recently in the media with TV dramas such as The A Word and documentaries by celebrities including Chris Packham, who himself has autism. I think it is fantastic the way that my Force and others are embracing autism awareness, and I believe together we can make a real impact in raising awareness and understanding of autism, both within the police service and the wider community.